So, you’re trying to land an IDIQ contract or other government contract for providing services – how will that work?  How are you going to get paid?  Government bids and payments are typically handled in different ways from how commercial businesses or consumers pay for services.

There are five ways that the process generally works, depending on the size of the order and the type of contract involved.

If the amount of the invoice is under $3,000, an approved agent will use a bank card and pay that way, like pretty much everyone else.  That might sound like small change -and it is by Federal standards- but these micro-purchases actually make up around 70% of Federal purchases!

Next on the level of scale are purchases up to $150,000.  In this case, there are simplified rules in place that minimize the paperwork and approvals necessary.  You’ll get your money fairly quickly.

This is one of the more common procedures, for larger contracts.  The relevant agency will send out an Invitation to Bid (ITB) which works much like an RFP in the private sector.  However, these bids are kept sealed until a particular date, when they are all opened at once and read into the agency’s record.  This protects against insider dealing. IDIQ contracts are usually this type, particularly when they are larger efforts.

In situations where the products or services are valued at over $150,000 and are in a highly technical field where few qualified bidders exist, the government may engage in direct negotiation.  They may issue an RFP (or a similar Request for Quote, RFQ) or else contact relevant companies directly.  This is, however, relatively uncommon due to higher costs and the elevated chances of corrupt behavior.

In situations where the order is going to be massive and multi-departmental, such as for office supplies, CPVs are utilized to leverage economies of scale.  These contracts are generally given out to several contractors at once, so purchasing and acquisition can be streamlined.  An IDIQ contract may be a CPV.

Learn the Secrets of Government Contracting from ASHER Government Training

Is your company interested in jumping into government sales?  Learn from the best!  ASHER has a long success rate of imparting relevant, actionable information to growing government contractors.  Contact us directly to learn more.

In our government sales training seminars at Asher Strategies, we focus on the prized IDIQ contracts, particularly getting more tasks on current contracts.  Indefinite Delivery / Indefinite Quantity ongoing contracts are among the most lucrative a business can receive from the government, and the ability to secure IDIQ new tasks is what defines many truly successful government contractors.

We want to teach you the skills your organization needs to consistently land those contract task orders – how to focus your proposals, how to get them in the right hands, and how to nail negotiations.  However, if we were to boil down the strategies, these are the attributes a company must have to succeed in IDIQ contracts.

The Top Ten Attributes of a Highly Successful Government Contractor

Asher Strategies has a legacy of excellence, showing companies how to best reach out to government agencies and secure more IDIQ contract task orders.  We aren’t simply bragging about our contacts within the government – we teach you the skills to cultivate and leverage your own contacts, forming partnerships, and building your company through excellence in services rendered.

Contact Asher Strategies today to take your growth to the next level. 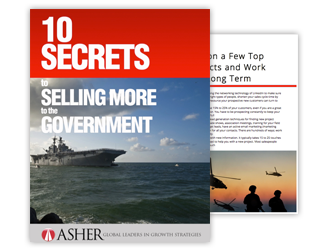